Barney T Rubble has been very poorly lately. He’s struggled with a problem in his right eye, where he has had cysts which have burst and caused him much pain. The result has been a very dry eye, which is also very gooey from time to time.

Add to that, he has hip problems, which he doesn’t help at all by lying down flat or worse, tucking one hip under the other and struggling to pull it back out again – so now he has an inflammation in one hip and leg too!

Thankfully, we have wonderful vets: Nikolas and Ani, at Onlyvets in Peyia, are just the best. Barney has always been under their tender care and is now being treated and, fingers and paws crossed, is starting to feel better  – which is showing in his tendency to want to play and run! It’s so lovely to see!

What wasn’t so lovely to see was, yesterday, when Tony had prepared Barney’s breakfast, adding the one and half ”bullets” of antibiotics then one and a half of anti inflammatory pills plus joint oil (as in for joints, not cannabis LOL), Tony added the meat , biscuits and gravy then turned to make a cup of tea, and Bruce cat, from the feral gang, shot through the  kitchen, up onto the worktop and into Barney”s bowl!

The food was gone in an instant! By the time Barney sorted out his hip and got his engines running, Bruce was off and out through the door!

I’m a little concerned about what the tablets may do to him! I suspect they’ll be a ”cure all” but worry slightly that if Bruce, erm, breaks wind, someone close to him could be ”shot” by the size of the bullet – or he’ll end up shooting down the hill at the speed of knots!

Couldn’t have done much harm: Bruce came back this morning for more but Barney was ready for him – well, in a  grumpy, ”get out of my way young man or wait there till I get up and catch you”, sort of voice!

Think we need to put a camera on the wall to see what goes on when we are out!

Photo is of Bruce, watching for food !

Animals: just got to love them! 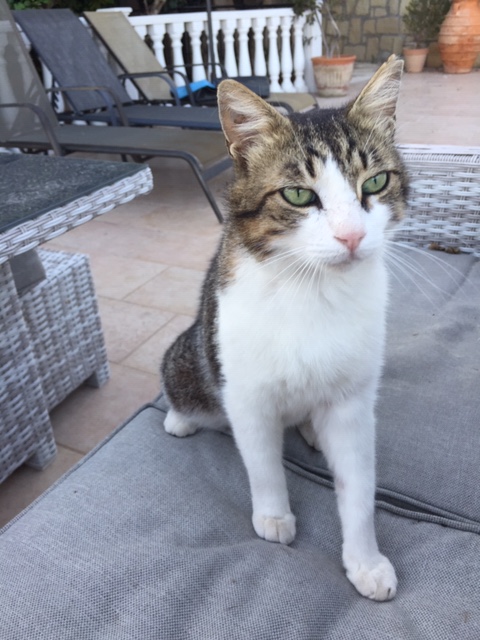 Keep safe and well and hope to see you all, next year! Lynn@cyprusvillas.uk.com