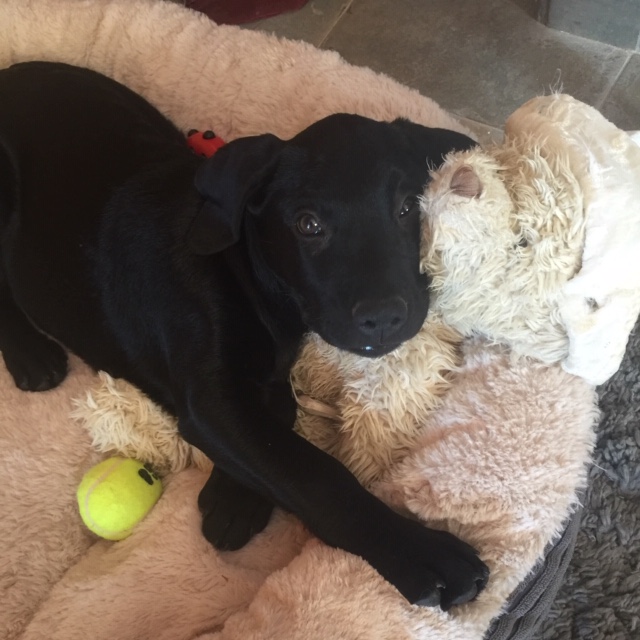 Published on 24th September 2021 by Lynn

My name is Dexter.

Well, it”s Dexter James Bell, apparently but that seems to be a bit of a people mouthful to me , so you can call me Dexter.

In fact, if you’ll help me break into the cupboard in my new kitchen and steal the food that my humans have put in there, you can call me anything you want!

So, I decided to move in with the two humans you call Tony and Lynn. People are so silly, they don’t realise that we animals have ”super powers” and can make things happen in our own way, if we wish it hard enough: and I so wished for a good home and people, that it might just have come true!

The animal fairies asked me what I was looking for so I made a list: the people needed to be able to open food packets for me; to have plenty of things I could bite into and leave my mark on; to let me piddle wherever I felt like it (well, at least while I’m small) and to let me wrap them around my paws!

I also wanted somewhere to run about safely – and to have brothers and sisters ..

So most of the wish list has come true except I didn’t study the Fairy code for Siblings bit properly- and I’ve got 3 cat brothers! How uncool is that? But at least I’ll be very much bigger than them soon and can get them back for sniffing me and scratching me when I moved in last night!

Today is my first full day on the hill in Peyia. I’m SO tired! I spent all of yesterday afternoon and last night, having to entertain my humans, then my new god parents (whatever they are), then two nice people who are staying in a villa on the hill near here.

It was SUCH hard work! I made them laugh; let them tickle my tummy and did that ”rolling my eyes to look cute” thing that humans like so much. (That bit was easy: I just copied my human father person: he’s very good at it and it seems to make my human mother person do exactly as he wants!).

I had a good nights sleep in a lovely soft bed – then got my own back at 5am and woke up  my human mother to make her play with me for a few hours. Now I’m going back to bed – and she seems to have fallen asleep with her head on the keyboard thing that you humans love! (Hope she doesn’t snore: I’m tired and need a rest!).

Anyway, the first almost 24 hours have been just great. I have nearly forgotten what happened to me before I arrived here though I still don’t get why the man who picked me decided he didn’t want me. He didn’t have enough stuff for me to chew anyway, so it’s all worked out for the best.

Oh and I’ve got toys! There is this cute angel who pretends she isn’t real but when the humans go to sleep, she snuggles me in and keeps me warm. And I’ve got a plastic thing to sharpen my teeth on so I can nip the humans when they are naughty…

Yes, I think it’s all going to be fine. I’ll let you know!